In this post, we will look at all of the watches that have been revealed New G-Shock Watch Releases For November 2021. Some models may be released in countries other than the ones listed. Due to factors such as supplier availability and manufacturing timeframes for each market, the release date of these products may differ by country or region in some regions.

The G-Shock AWG-M100SVB-1ADR is a stylish, multi-purpose watch that is ready for any adventure. It has several time zones and solar power to keep your charge going wherever life takes you.

The Gravy’s zebra is the motif of the G-Shock GA 110WLP 7A, a Wildlife Love the Sea and Earth watch. This model has two separate faces, one of which is an endangered wild species listed under the Washington Convention, and the other reflects their love for the earth , on which they live peacefully with other creatures like themselves!

G-SQUAD GBD-200SM is the first Skelton Series. The skeleton bezel is bold and bright colors, which makes it perfect for any sport. Its design features vibrant orange or purple hues that are often found in sneakers and activewear because they help you stay focused during your workout. GBD-200SM-1A5 has a brown bezel and strap is grey and the inner case is orange. GBD-200SM-1A6 has a grey bezel and the strap is grey and the inner case is purple. Kanoa Igarashi x G-Shock GBX-100KI-1 second collaboration Olympic medal-winning pro surfer.

The G-Shock GBX-100KI-1DR and pro surfer Kanoa Igarashi have collaborated on a second signature watch, the GBX100K1. This special edition is inspired by his recent Olympic medal success with Team USA in Rio de Janeiro, where he earned silver

Casio will announce a second collaboration with seasoned golfer Ryo Ishikawa to commemorate the 40th anniversary of the Casio World Open Golf Tournament. The G-Shock GM-2100RI 21-7AJR is a stainless steel variant, similar to the G-Shock GM-2100, with a white resin band and a blue dot on the dial that resembles a golf ball. The golfer’s autograph appears on the rear case of the GM-2100RI21-7AJR.

LOV-21A-1A and LOV-21B-7A  lovers collection is an exclusive series for G-Shock and Baby-G watches. It’s based on the lover equation, which states that two people who share a mutual love can create something greater than either one could do alone; this idea resonated deeply within their hearts so they created these beautiful timepieces inspired by it!

G-Shock Rangeman GW-940KJ-3DJR  features environmental NGO earth watch and takes inspiration from swell sharks that are known for their ability produce bioluminescence, which they use as an indicator or warning sign when danger approaches. The swell shark is a deep-sea creature that glows green due to fluorescence. It’s fairly common in Southern California waters, where it can sometimes be seen while snorkeling or diving off the coast of Los Angeles. G-Shock range man GW-940KJ-3DR is based on the GW-9400.

The rainbow Mountain Limited edition G-Shock MTG-B2000XMG1A bezel is made up of multicolored and layered carbon fiber that gives it an edgy look. It also features a colorful inner ring with IP branding for added appeal, making this model truly one worth checking out!

G-Shock is set to release two new skeleton watches: the black and green GBA-900SM1A3, as well a white with  GBA-900SM-7A9 details for an even more elegant look in your wardrobe. The glossy finish of this model makes it stand out from other timepieces on offer today because there’s no denying its beauty! 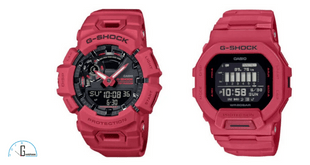 G-Shock has announced the new G-Shock red GBD-200RD and GBA 900RD series watches, which are …