If we see that what’s inside the GX-56BB Series which makes it very tough three important things in this GX-56BB with double-layer bezel, inner Protector agel Protecting the module. This protection makes the GX-566 can withstand impact from all directions. Special dust and mud resistance construction. The resin band is thicker and stronger than other G-shock it also feels a bit stiff but still comfortable to use.  Double Back Case also improving the toughness. Comes with EL Light which gives good visibility in dark Total weight is  88gram, Heaver than other G-shock watch.

How to set Time G-Shock GX-56BB

For more Info how to Time on GX-56BB Click here

G-Shock GX-56BB is a glossy black model with black lettering and a Black -tinted reverse display.

G-Shock GX-56-4A is the orange- model. The face has a Black surface color.

G-Shock GX-56E-1A has very light lettering on the bezel, a light blue dial ring, and a standard LCD display.

G-Shock GX-56GB-1 is a black square model with Black accents. 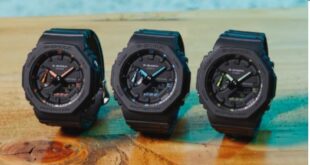