It’s good news for all the Apple fans that the Apple watch series 7 is on the way, and it is soon going to be launched throughout the world. By recent rumor’s, it is confirmed that this series is going to have a different design, specs and maybe it is going to be an upgraded version. It’s been almost six years since Apple has introduced their first watch, till yet we have many changes and more powerful sensors. But from the past couple of years, the new model of the watch was not so upgraded and was very similar to the previous one. But this time, the game is going to change as Apple watch series 7 contains many different features and designs which will attract the customer. Apple smartwatches are always popular among people because of their market value. This luxury brand is considered a reflection of your status, and many brand-conscious people even buy these things at a very high price because they know their worth. They believe that this investment is not going to be wasted because the market value of IOS products is never down even if we talk about smartphones, smartwatches or any other thing. So let’s discuss more about the feature, design, and releasing date in detail.

Many of us had money hopes for a significant change in series 6, but series 6 didn’t bring any substantial and mesmerizing design which we were looking for. But back in September, Ming-Chi Kuo, an industrial analyst, predicted that the significant form factor design change” to the Apple Watchis coming very soon, maybe at the second of 2021. It is very much possible that the upcoming series would have flatter edges, and it is also possible that this time Apple is going to launch a round face design. You must be wondering about how it is possible, but yes apple company has considered this design, but it is confirmed that the watch series will have a round face or not. Another expectation is an edge-to-edge screen and flexible screen. Let’s see what is going to be the outcome as we have heard different from everyone, so it is cleared that the original look of the watch has not been declared till now.

Health and fitness have been the priority of many big luxury brands for some years. Apple watch series 6 had the feature of blood oxygen monitoring. Still, it was not approved by the FDA, so we are expecting this feature with FDA approval so we can have accurate blood oxygen measurements. Currently, Apple is continuously working on heart rate measurement and blood pressure monitoring. It is also heard that they are planning to add a blood sugar monitoring feature just like the Samsung galaxy watch 4. Surely there is going to be a great upgrade in the Apple watch series 7.

We have heard from several rumors that the Apple Watch Series 7 is going to have a touch-id fingerprint scanner. It has also come on the surface that Apple is going to replace the OLED display with a micro-LED panel or mini-LED. It will be helpful to save the battery as the display will be thinner and offer better energy efficiency. This time Apple has been working with Taiwanese display manufacturers for the new panel of their fantastic series.

On 7 June 2021, Apple announced WatchOS 8 at WWDC. WatchOS 8 has many new features like a portrait app, a mindfulness app, and digital key, etc. This software will provide an update on photos,  messaging, an app that helps you to keep fit, assistive touch, Siri, and some new and amazing apple wallet features.

This watch is soon going to be launched by the side of iPhone 13, maybe in August I mid, or September. Apple is going to introduce many upgrade features this time, and if the battery life is improved, it can give tough competition to the Samsung galaxy watch. Apple is considered one of the best luxury brands, and this time Apple watch series 7 is going to be a game-changer. We will upload a confirmed update more about this watch very soon 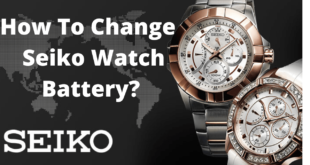 How To Change a Seiko Watch Battery?

The Seiko watch is a long-standing brand that’s survived all kinds of situations. Although their …